The Royal Government of Bhutan is investing in the country’s female workforce by empowering women to become leaders, and advocating more broadly for gender equity and women’s participation. As part of this investment, 11 women and 2 male ‘champions of change’ from Bhutan’s civil service completed an Australia Awards Short Course in Women in Executive Leadership Development in May 2021.

During the Short Course, the 13 participants took part in a comprehensive suite of learning and practical activities, culminating in each participant developing their own Return to Work Plan. These plans guide how participants will put their new knowledge into practice and work towards building a more gender-equal society in Bhutan.

The Short Course has catalysed a number of ambitious initiatives. For instance, participants Dechen Eadon and Yeshey Khandu asked, “How might we create opportunities for women to compare experiences, gain support and grow in self-confidence, leading to increased women’s participation in leadership roles?” This led to the formation of Bhutan’s first Network of Women Leaders, a network that will include high-level representatives from the government, private and non-government sectors, as well as male ‘champions of change’ and Members of Parliament. 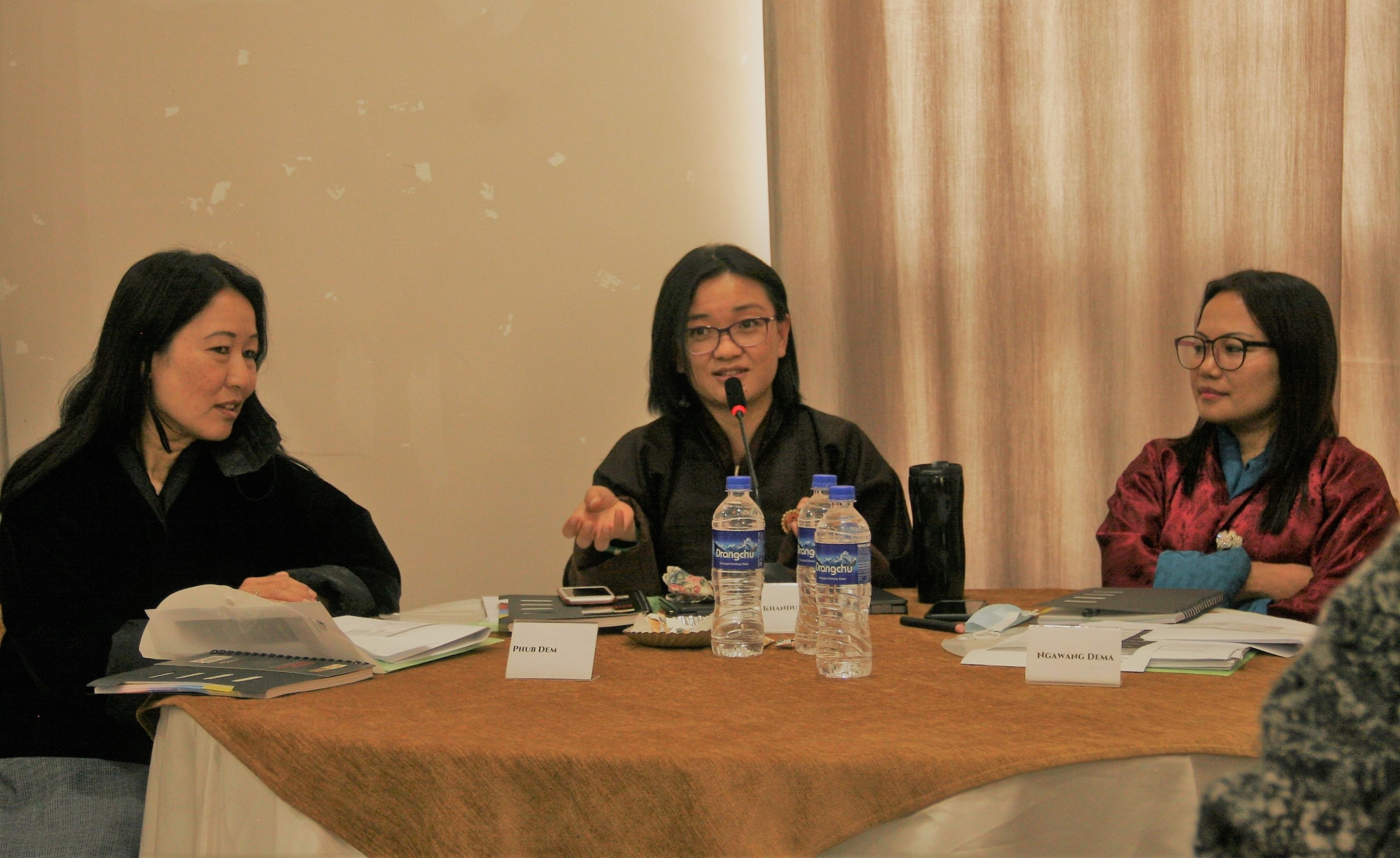 Participant Yeshey Khandu (middle) sharing her views during the Short Course training at the Institute of Management Studies Limited, Thimphu, Bhutan in March

Kezang Choden’s efforts offer another example. Through her Return to Work Plan, Kezang is delivering coaching and leadership programs for students and teachers at Sang-Ngag Chhoeling Lower Secondary School in Samtse, Southern district, where she is Principal. These programs are aimed at empowering young women to become the next generation of leaders for their community, and have been received enthusiastically. After attending a student program, student Aster Rai said, “I thought that boys were always better than girls, but after this session my thinking changed a lot. I am now motivated to take up a leadership role in the future and become a strong woman.” Another student, Alena, reflected, “From this session my confidence has been boosted as a girl … I also want to educate our parents not to differentiate between boys and girls.”

Kezang’s programs have also had an impact on teachers’ thinking. For example, teacher Kinga Yeshi commented, “From this session I developed a sense of responsibility as an educator and teacher to encourage my students, especially female students, to move forward and take up roles of a leader.”

Separately, Pema Dechen, Chief Engineer, Dzongkhag Administration, is empowering her female colleagues by improving working conditions for parents with small children. As a result of her participation in the Short Course, Pema has introduced an initiative to enable flexi-time and assign work closer to home for mothers who need flexibility to care for young children, and gained approval from management to establish a crèche. Through creating a supportive environment for women, Pema hopes to increase the confidence of more women to take up leadership positions.

“Through this course I was able to recognise my own potential, which has raised my confidence … I have come to see that women have potential,” says Pema of her Short Course experience. 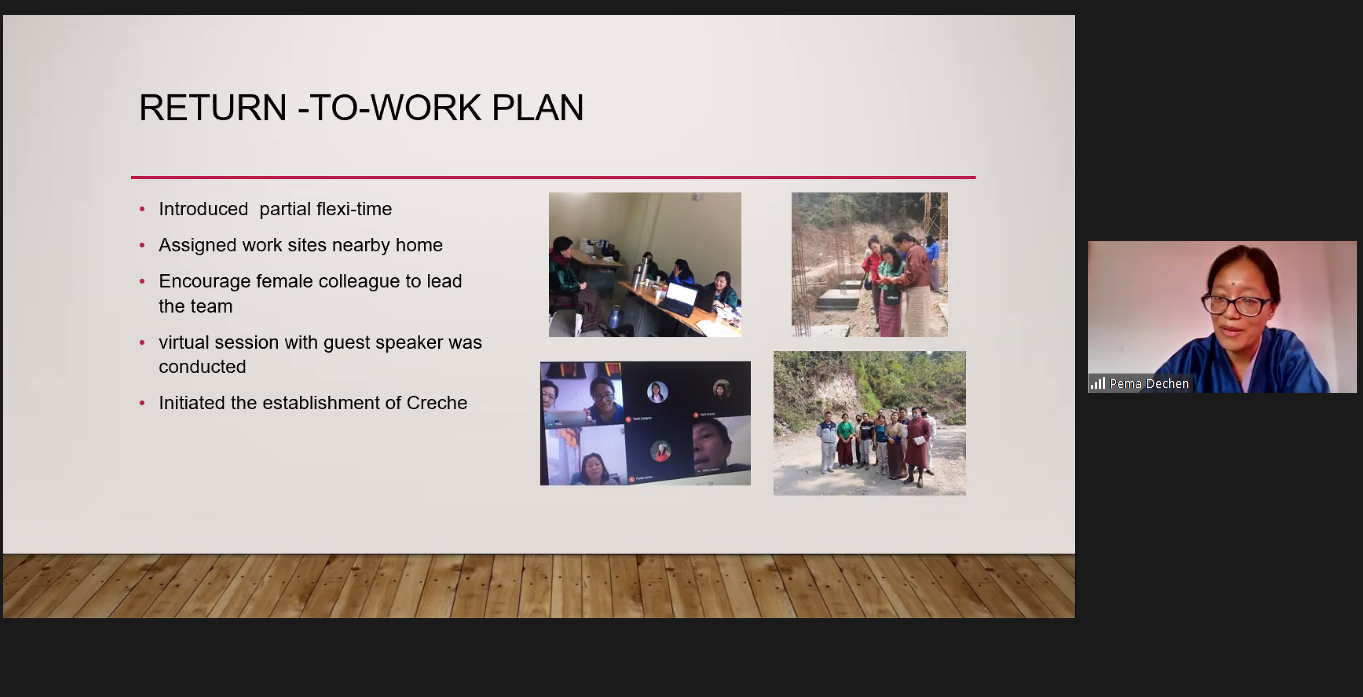 Another participant, Ugyen Tshomo, has been raising awareness of the services in place for victims of gender-based violence, sexual harassment and exploitation through implementation of her Return to Work Plan. Additionally, Phub Dem has been building greater understanding of what it really means to mainstream gender across the Ministry of Agriculture and Forestry, as well as mainstreaming the needs of other diverse and marginalised groups.

The Short Course in Women in Executive Leadership Development was delivered by the University of Queensland in partnership with the Institute for Management Studies Limited. Originally intended for delivery in Brisbane, Australia, the course pivoted to a hybrid delivery approach due to the COVID-19 pandemic. Participants engaged with the University of Queensland’s staff, mentors and sector leaders online, and in person with facilitators at the Institute of Management Studies Limited in Thimphu, Bhutan, where they were able to come together for their core learning elements and successfully complete the Short Course.

A a short video by the University of Queensland’s Global Engagement team. The video features three Australia Awards alumnae, Dechen Eadon, Kezang Choden and Pema Dechen, who share their experience and learnings from the Short Course.