Dasho Pema Thinley, Vice Chancellor at the Royal University of Bhutan, fondly recollects the day in 1969 when he began a life-changing journey from Trashigang, in Eastern Bhutan, to Australia. He had just completed his matriculation, but the education system in Bhutan did not go beyond that level and Indian institutions did not recognize the Bhutanese matriculation certificate.

The Ministry of Development (as it was then) secured five scholarships under the Colombo Plan for him and other four boys to study in Australia. They all enrolled at Hale School, a private school in Western Australia, 20 kilometres north-west of Perth.

“If I had not received the scholarship and not pursued higher education in Australia,” Dasho Pema said, “my life would have taken a totally different course”.

The Vice Chancellor explained how he went to Australia. “There were only a dozen vehicles in the whole country in those days and no bus services,” he said. “Luckily some Swiss Experts were taking some yaks by truck from Merak Sakteng, a nomadic community north-east of Trashigang, to Thimphu for research. I literarily rode with the yaks to Thimphu so the government could prepare me and my friends to travel by road to the Indian border town, then train to Delhi and finally our flight to Australia”. These five young men were the first Bhutanese to study in Australia.

Dasho Pema completed his A-levels at Hale School (1972), a Bachelor of Arts at Western Australian Institute of Technology (1974) and a Diploma in Education (1975). In the early 1980s he returned to complete a double Masters in Education and Curriculum Studies with Honours at the University of New England, Armidale. He was awarded an Honorary Doctorate in Education by the university in April 2004, only the second awarded to an overseas candidate. 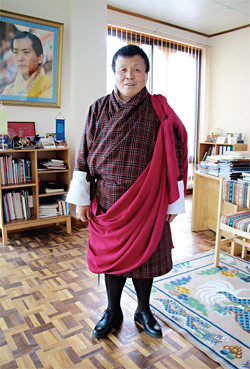 In reflecting on his experiences in Australia, Dasho Pema recalled, “Everything was a new experience. Frankly, Australia was a strange country”. He laughed, saying, “Most strange was that we had no rice!” He recalls arriving just before Christmas and an advertisement inviting interested families to take in the five boys from Bhutan. There were about six hundred responses and the best five families were selected. He is still in contact with his Australian friends; the friendliest, most accommodating people he has ever met.

Would the Vice Chancellor recommend Bhutanese to study in Australia? “Definitely!” he said spontaneously.

“In fact, I recommended many teachers to go to Australia while I was in previous positions; both on AusAID and other scholarships. Australia has an excellent education system; people are friendly and learning experiences are encompassing.”

In concluding, he said, “I am very thankful and indebted to Australia, Australians and the Australian education system for making me the person I am today”.