Australia Awards alumnus Dr Tshering Cigay Dorji is passionate about harnessing the power of technology for the development of his home country. He believes that technology can offer a lot of opportunities for a landlocked country like Bhutan and is also passionate about innovation and empowering youth.

Cigay is the current CEO of Thimphu TechPark Ltd, Bhutan’s first and only IT park. In this role, he is at the forefront of breaking new ground in IT innovation in the country and facilitating the growth of tech entrepreneurs, especially supporting young talent. He is addressing the emerging national challenge of youth unemployment by offering employment opportunities to youths at various IT firms set up at the TechPark. He also supports start-ups at the park’s incubation hub. More than 800 Bhutanese youth have been employed in the seven foreign companies (including two Australian companies) currently operating from Thimphu TechPark.

‘I had dreamed since high school of studying abroad. When I was nominated by the government of Bhutan and was selected for the Scholarship, that dream came true,’ he says. ‘It was also the first time I ever boarded an airplane.’

He found that he was able to blend in with the Australian culture and way of life easily. ‘I felt at home,’ he says. ‘My friends and I supported Australia vehemently in international sporting events, watched rugby, sat around the BBQ, drank Victoria Bitter and sang the chorus to the famous song, I am Australian. 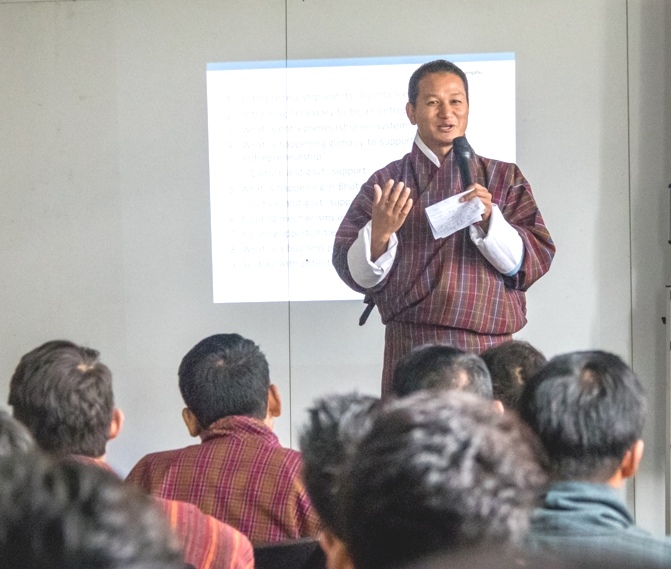 With aspirations to learn more, Cigay pursued postgraduate studies in Japan and returned in 2010 with a doctorate in Engineering, specialising in natural language processing and text mining. Two years later he joined Thimphu TechPark.

His role as the company’s CEO required administration and management skills. Further strengthening his linkages in Australia, he enrolled in the Master of Management program of the University of Canberra. This program was administered through the Royal Institute of Management in Thimphu in 2013.

Cigay says it is gratifying that he could contribute to the organisations he has been associated with in his professional journey.

‘It was only through the education and exposure I received in Australia that I was able to achieve these professional heights,’ says Cigay.

He still maintains the connections he made in Australia.

‘I made many friends from all over the world,’ he says. ‘I understood different cultures and religions and knew how to respect them. Australia Awards opened up a whole new world for me. I am still in touch with many of the friends that I made in Australia over 20 years ago.’

He says he will continue to use the knowledge and exposure he gained in Australia for the development of his home country.

‘I am a strong advocate of technology, innovation and youth empowerment,’ says. ‘I believe that we have to be future oriented if we don’t want to be left behind and want our future to be brighter. Change we must, but without losing our age-old values that have defined our Bhutanese character.’