Lily Wangchhuk was a writer, travel operator and consultant working for the Ministry of Foreign Affairs when she applied for an AusAID scholarship in 1999. As a Protocol Officer, she planned, coordinated, organised and maintained public relations. She was also attached to the Bilateral and Multilateral Affairs for South Asia and SAARC Division, where she successfully pursued implementation of many SAARC events.

She was a member of the Bhutanese Delegation to the 10th SAARC Summit held in Colombo.

She studied at the Australian National University Canberra in 2000, graduating with a Master’s in Public Policy, specialising in Diplomacy and International Policy. 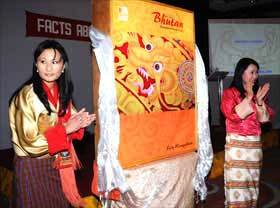 Lily Wangchhuk at the launch of her book ‘Facts About Butan’

After completing of her studies, Lily served in several important positions, including a diplomat with the Royal Bhutanese Embassy in New Delhi, India and Desk Officer for the Ministry of Foreign Affairs, Royal Government of Bhutan (RGoB). She later left the civil service to join the Bhutan Office of UNDP, where she became the Head of the Governance Unit. UNDP was a major development partners in strengthening the electoral processes of the first democratic election of Bhutan. Lily made valuable contributions to Bhutan’s historic transformation and could do so because of the academic grounding she received from her studies at the ANU.

She says her experience changed her life completely, teaching her to use her analytical ability make informed decisions, weighing options and considering short- and long-term implications. Her skills in these areas enabled her to provide substantive policy analysis and strategic advice on policy matters to the RGoB and UNDP Bhutan.

Lily has authored a book, Facts about Bhutan, to promote Bhutan. The book covers a diverse range of topics and is the first of its kind to be published in Bhutan. It is being used widely by the RGoB to introduce visiting dignitaries to the country and by civil servants as they travel abroad.

Lily continues to shape policy and address issues in the country as a freelance writer and consultant on socio-economic matters.