Meet the determined Police Major who, after studying forensic science at Flinders University under an Australia Awards Scholarship, set up Bhutan’s first dedicated forensics service, helping to improve the quality of justice in his country. 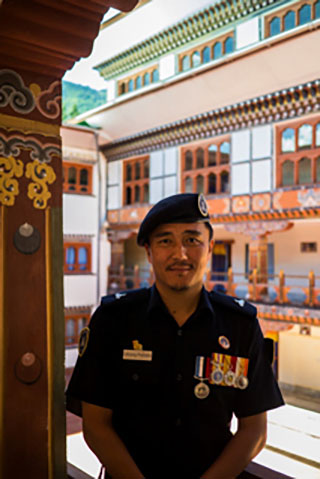 “Take a ride and be happy” the slogan painted across the back of a city bus urges as it rolls past a taxi encircled by crime scene tape in Bhutan’s capital, Thimpu. Perched high in the Himalayas, Bhutan, isolated from the rest of the world until the 1970s and the last nation on earth to introduce television in 1999, is more famous for pioneering the idea of gross national happiness than incidents of crime.

In fact, the country has the region’s lowest crime rate. Today, though, the Thimpu police station’s forensics unit is inspecting every inch of a stolen taxi recently involved in an armed robbery.

Before 2004, this scene, with dedicated specialist officers unpacking their forensics kit boxes to investigate a serious crime was unimaginable as there was no organised forensics service within the Royal Bhutan Police Force.

Major Phuntsho Lobzang, Head of the Forensics Section, explains that previously, when the police attended a crime scene their focus was on getting testimonies and, without the proper training and right equipment ‘often times they would ignore physical evidence.’ The problem, he points out, is that testimonies can be biased, or influenced, making it difficult for judgements to be passed beyond reasonable doubt.

Major Lobzang is one of hundreds of Bhutanese to have been awarded a prestigious Australia Awards Scholarship. In 2004, when he returned to Bhutan, having studied DNA technology at Flinders University in South Australia, he was one of only two people in the country trained in forensic science.

With his passion for justice, the determined Major used the knowledge he gained in Australia to spearhead the development of Bhutan’s first forensic science service within the Royal Bhutan Police.

Even though crime rates are low, developing a capable forensics service was critical. “Gross national happiness being the development theme of Bhutan, I think forensics plays a vital role in ensuring that not even a single individual is wrongfully convicted in this country,” he says.

With the support of his superiors and colleagues, Major Lobzang trained a cadre of police officers as forensic specialists, and raised funds to equip them with the basic gear – from latex gloves to collection vials – so that they could properly collect, handle and transport forensic evidence.

Phuntso Lobzang’s imageToday every police station across the country has a forensic unit with specially trained officers and the needed equipment. A basic laboratory is now also operating out of police headquarters, and the country’s 36 stations send their collected evidence to this forensics hub.

“We examine fingerprints and we also examine physical evidence, however, for advanced procedures such as DNA or chemical analysis – we refer to laboratories abroad since we don’t have the equipment and technology here,” Major Lobzang explains.

“This [Australia Awards Scholarship] has created a bridge that connects me with Australia,” he says, and during the investigation of a recent murder case, evidence was sent to the Forensic Science Centre in South Australia, where the Major still maintains professional contacts with his former mentors. “Within two weeks we got a result – the blood found on the suspects t-shirt matched that of the deceased – and he was convicted of the murder.”

Often, though, evidence sent abroad takes months to be processed, holding up serious legal proceedings in Bhutan. Having seen the value of a dedicated and capable forensics service, the government is now committed to building a well-equipped National Forensic Science Laboratory over the next five years to break this bottleneck. As crime rates are low in Bhutan, the idea is that the Laboratory will recover costs by offering services to a range of potential clients, including the private sector. 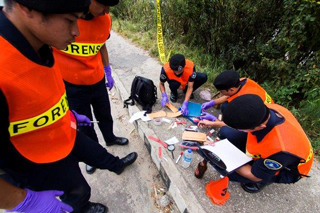 Working in his office, Major Lobzang is surrounded by family photos, certificates of achievement and other accolades, including the prestigious national ‘Drakpoi Norbu Yoedsel Medal’, awarded to officers for outstanding national service. But for the Major, the greater rewards lie elsewhere.

“As a forensic person, if I go into a prison and somebody says I was innocently convicted that would be the worst nightmare for me,” he says, recalling a case involving two students who were driving through Thimpu late after a party one evening when they had an accident.

Phuntso Lobzang’s imageThe next morning one was found dead next to a sewer, while the other languished in custody charged with involuntary manslaughter on ‘fairly circumstantial evidence’, explains Major Lobzang, who led the forensics investigation. The tangible evidence revealed that the two had parted company and later one had slipped and fallen into the sewer, where he died in the early hours of the morning.

“The student held in custody was acquitted and is now studying at one of the colleges in Bhutan,” Major Lobzang says. “This is the best story, when someone innocent is exonerated based on the evidence, there’s nothing more rewarding than that.” 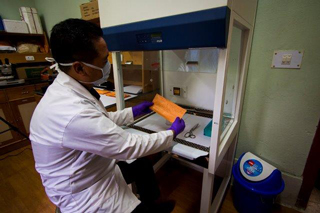 Major Lobzang in his forensic lab.

Since Australia started its program of support to Bhutan in the late 1960’s, hundreds of leaders like Major Lobzang have gain valuable knowledge and connections through Australia Awards Scholarships. In the case of strengthening Bhutan’s criminal justice system, this support has enabled Major Lobzang to help improve the quality of justice in his country.