After studying dairy science at the University of Melbourne, Australia Awards Alumnus, Phuntsho Norbu has helped hundreds of subsistence farmers and their communities to improve their incomes by leading a project aimed at creating a viable dairy industry in Bhutan.

Follow this new industry’s value chain and meet Phuntsho as well as some of those who have benefited along the way.

Imagine being unable to buy fresh milk at your local shops. Until recently that was the reality for consumers across the Himalayan kingdom of Bhutan. There was no shortage of potential suppliers, though, as farmers everywhere, like Gembo Dorji, had milking cows. 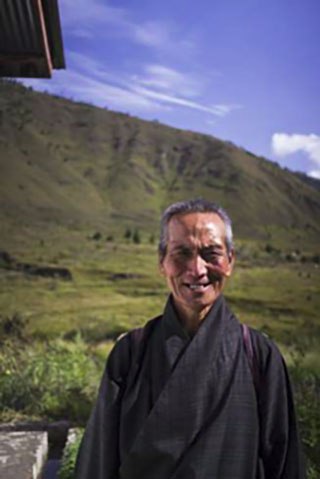 Early every morning this energetic father of six milks his two cows in a well-maintained wooden shed, perched on a tiny plateau next to his home. As the clouds lift to reveal a plunging valley and river below, Gembo explains that in the past his family used the milk only for themselves, drinking it fresh and making cheese or butter. They were almost totally reliant on the success of their annual harvest of chillies, rice and vegetables, which they cultivated on the steep terraces surrounding their home.

“With that type of cultivation, sometimes you can make a good income,” says Gembo as he strains the milk. But, it was also risky and with nothing to fall back on, failed crops meant disaster. “When we needed cash we would try to sell our cheese or butter on the roadside,’ he recalls.

These days, when the milking is done, Gembo straps a wicket basket to his back and climbs down into the valley, crosses the river and hikes up to the roadside carrying fresh milk instead of cheese. He delivers at least 20 litres daily to a small ‘collection centre’ sandwiched between the road and the rapidly flowing river.

Gembo is one of eight farmers in his village who are now working together to produce, package and market their own brand of dairy products. They are among hundreds of farmers organised into small groups under a recently concluded Ministry of Agriculture project (funded by the Netherland’s government), which aimed to create a viable dairy industry in Bhutan. 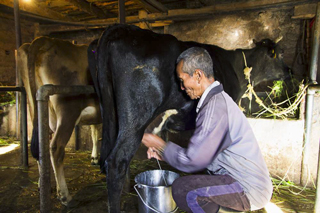 Phuntsho Norbu milking one of his herd

Phuntsho was put in charge of the Ministry’s ambitious new project. “We intended to formalise the dairy sector, and we were able to do that by creating central locations where the farmers could collect their milk and deliver that milk to retail outlets,” he says.

Phuntsho is one of hundreds of Bhutanese to have been awarded a prestigious Australia Awards scholarship.

“The technical knowledge I gained in Australia has been very beneficial,” he says.

“I have been able to teach the farmers various aspects of dairy production, starting from the farm level where we teach them to produce milk in a hygienic manner, as well as at the collection centres where we teach them how to test the milk in terms of quality,” he says. “In terms of product diversification, we’ve been able to transfer technology to private entrepreneurs and dairy farmers groups.”

In recent years, Gembo’s cooperative has taken up this technology and branched out into making their increasingly popular Rama Farm Fresh Yogurt. “We now employ four other people – a lady who does our accounts and three boys from the village who make and pack the yogurt,” he says. 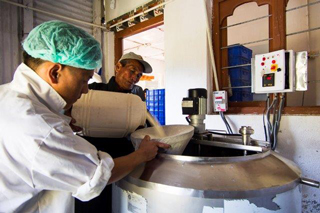 When Gembo arrives at the collection centre he is greeted by Tashi Bhendup, dressed in a white smock, hairnet and face mask. He measures the milk and tests it. Once all the farmers have delivered their milk, Tashi and his colleagues fire-up the huge steel vats to start making the yogurt.

Before this job came along, Tashi, like a growing number of young Bhutanese was unemployed and worried about his future. As he loads the freshly packaged yogurt into the waiting delivery van he talks about how this job has not only given him new skills, but also hope for the future. “My plan is to open my own dairy shop one day,” he says, as the van pulls away to deliver the latest batch of yogurt to retailers in and around the capital, Thimpu.

In the central shopping area of Thimpu, a dairy shop owner manages a brisk trade. He started this business five years ago after gaining the right know-how and equipment through the government initiative.

Since then, the demand for fresh milk, yogurts and cheeses has seen his business grow rapidly and he now employs 12 people and earns an above average income.

He says his customers are pleased to finally have a place where they can easily buy dairy products that they know have been produced locally in a hygienic and safe way.

Back in the village, Gembo reflects that in Bhutan cultivation “farming is an annual affair, but this [milk production] is like a salary system, with a monthly income.” With this steady flow of cash Gembo says life is far less stressful as the family can plan their budget. It has also enabled him to secure a bank loan to educate his younger children in India. “As a farmer from the village,” only reliant on cultivation, he says, “the bank would never have given me a loan for that.”

His children have gone on to become teachers, and the youngest was recently elected to the national parliament, Gembo reveals with a glint of pride.

“Being able to utilize the knowledge I gained in Australia and being able to help these farmers achieve and enhance their incomes is very rewarding,” says Phuntsho.

With 70% of Bhutan’s population living in rural areas and mostly involved with agricultural production, Phuntsho believes that many more people can benefit from the new and growing dairy industry. “We have many farmers who deal with cattle in particular – As of now we are largely dependent on imports from India, so hopefully over the next five to ten years we will be able to change that and achieve a certain degree of self-sufficiency in dairy production.”

The Bhutanese dairy industry is one of many to have benefited from the Australia Awards. Since Australia started its program of support to Bhutan in the late 1960’s, approximately 280 scholarship have been granted to Bhutanese like Phuntsho to gain valuable knowledge and connections in Australia, enabling the country to make strides and improve lives in sectors ranging from agriculture to urban planning, media and policy development.