Selected Australia Awards scholars from South and West Asia came together in Canberra for a two-day Scholars Forum in October 2018 to support institutional and people-to-people links between Australia and the region – a first for Australia Awards.

Wangmo’s reflections on the Scholars Forum

‘The Scholars Forum was an important event hosted by DFAT where we, the scholars, got the opportunity to meet and get to know each other closely. The agenda was designed in such a way that we were able to share our own visions towards driving change in own countries and the work we have done so far, till now, to achieve it. Further, it was an honour to listen to Heads of Mission of each country share their thoughts and their advice on what it means to be a leader. The Forum was also a platform for new scholars to hear about the significant achievements of other scholars and alumni. This provided much-needed encouragement. Most importantly, I made close friendships with a few scholars that I will value throughout my life. I believe that such Forums are very important and should continue every year, as it provides an excellent platform for individual growth, building self-confidence to speak up in public, build networks and learn to lead.’

‘I made a presentation at the Forum, where I got the opportunity to share how challenging it was for me at the beginning when I moved to Australia, as I did not have anyone from my country at the University I was enrolled at or the city I moved to. However, this really pushed me to see it as an opportunity, or even a responsibility, to establish linkages or networks at a very personal level between my peers; and myself and at a larger level between Australia and Bhutan. I joined university clubs and through those clubs, I volunteered to be the Master of Ceremonies for functions at the university. Today, I am the vice-president of the Australia Awards Club at my university, where I not only get to network with people of different cultures but also share visions under the same Scholarship.’ 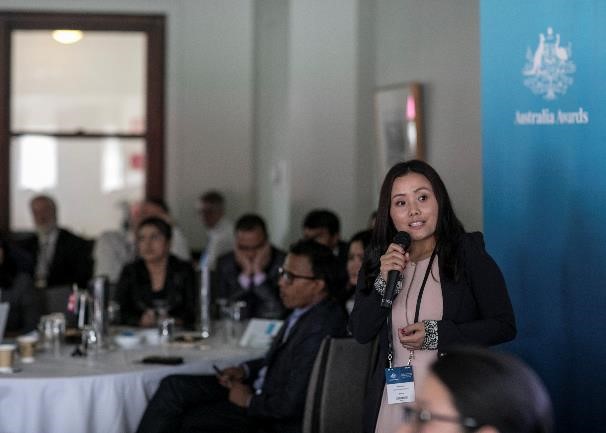 Wangmo speaking at the Scholars Forum

‘Despite my course work being extremely challenging and demanding, I believe that having a life outside of studies and building networks is vitally important. I plan to take part in events hosted by Engineers Australia since the first one I attended not only was successful in building professional linkages but also gave me many insights on energy storage scenarios in Australia, which is a very important context at my home country as well. I have also had a few opportunities to share my country’s culture with Australians at a professional level. Australia Awards is not only helping me enhance my knowledge in power engineering but has also given me the opportunity to build networks and linkages at both personal and professional levels.’

Wangmo is undertaking a Masters in Engineering Science at the University of Southern Queensland. Prior to commencing studies in Australia, she was a civil engineer at a Hydro-power Company in Bhutan. She has chosen to specialise in Power Engineering, which she believes will help her progress further in her career while contributing effectively towards strengthening Bhutan’s power sector. 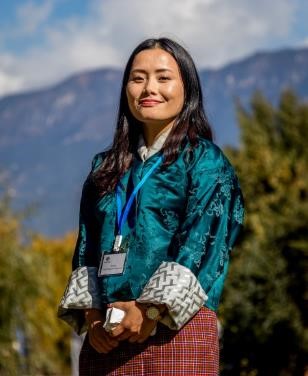