Australia Awards alumna Sonam Pelden Thaye has spearheaded and contributed towards significant initiatives in Bhutan, including the institutionalisation of the Election Commission and promoting the delivery of core public services from electronic and mobile platforms.

This year (2019) Sonam took over responsibilities as the Director of the Royal Institute of Management (RIM), the apex training institute in the country, established under a Royal Charter in 1990. The Institute promotes good governance through its core objectives by imparting and promoting professional knowledge and skills among professionals in the public and private sector. Sonam believes that her role at RIM has provided her with more opportunity for growth and change.

“The environment is fluid, people’s expectations of the public services have changed and teaching methodology has evolved; against this backdrop, my contribution to making RIM responsive, relevant and effective becomes all the more significant. The changes that I initiate in RIM will have a multiplier effect in the public service through the civil service recruits, therefore I am excited yet humbled with my new assignment,” Sonam says.

With more than 20 years of experience in governance and organisational development, Sonam has also been at the helm of public service delivery reforms.

“I have always believed that the development of our nation is hinged on the quality of our public service. Therefore, working at RIM gives me a unique opportunity to work on the skills of our civil service entrants and prepare them for their future endeavours. At RIM we strive to take our officer recruits to the next level, so that they are able to acquire the requisite skills and knowledge, and to inculcate values in them as they embark on their career in the civil service,” she says. 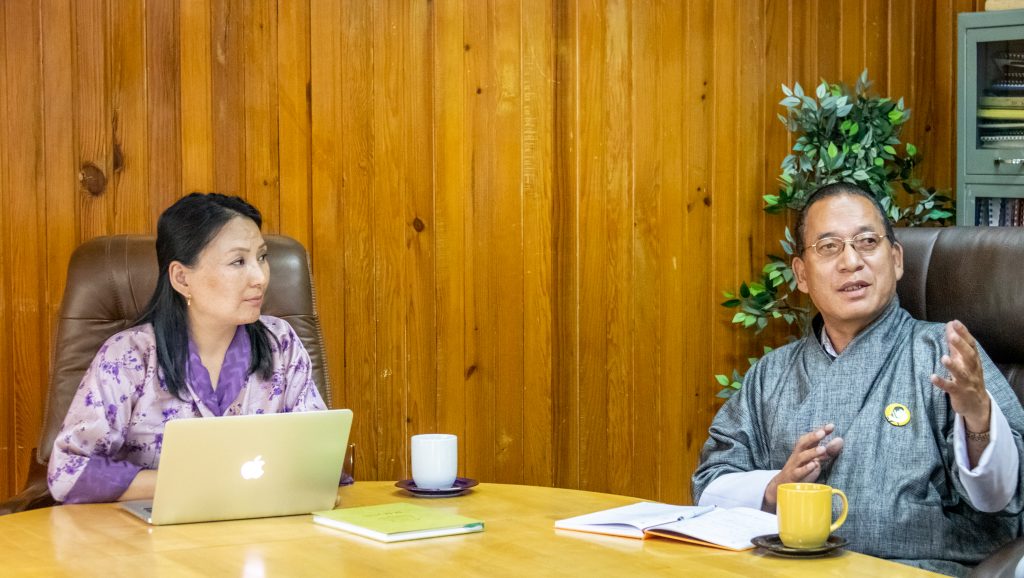 Before assuming the role of Director of RIM, she served as Director of Directorate Services (Ministry of Labour and Human Resources), Head of Government to Citizen Services, and Chief Program Officer of the Good Governance Division in the Cabinet Secretariat & Office of the Prime Minister, among other roles.

Sonam holds a Master in Public Policy (specialising in development administration) from Australian National University, obtained through an Australia Awards Scholarship, and also a Bachelor in Political Science from Delhi University.

“I had grown up listening to stories of my father’s educational sojourn in Australia in the early ’70s. Therefore, as a civil servant aspiring to further my educational qualification, the country that came to my mind first was Australia,” says Sonam, reflecting on her decision to apply for an Australia Awards Scholarship.

Sonam says her experience in Australia added value to her life, professionally and personally.

“My educational experience prior to Australia was limited to Bhutan and India,” she says.

“The study period in Australia was an eye opener. I was exposed to a diverse college campus, thereby allowing me to understand and appreciate diverse values.”

“On a personal front, I made lifelong friends, not just with Australians but also friends from the Pacific islands and South East Asia. Besides absorbing the Australian culture, I also happened to develop a taste for vegemite on my toast, which I must say is an acquired taste. Australia will always have a special place in my heart” says Sonam.

Upon returning from Australia in 2006, Sonam joined the Election Commission of Bhutan, which was a newly established organisation at the time.

“I took this as an opportunity to contribute to the institutionalisation of the Election Commission of Bhutan by incorporating new systems and processes. The knowledge gained from classes in electoral policy and election engineering came in very handy, as did my exposure to the Australian electoral system. As the Head of the Department of Electoral Registration, I was able to make significant contributions to the first Parliamentary elections in the country. The most noteworthy of these contributions were issuing of Voter Photo Identity Cards and the preparation of the first electoral roll for the country. In recognition of my contribution, I was awarded a meritorious promotion by the Royal Civil Service Commission of Bhutan,” Sonam says with pride.

“That was the immediate benefit, but even now, the knowledge and skills in critical thinking and policy analysis and formulation continue to guide me in my day-to-day work,” she adds.

Sonam is also a recipient of the Hubert H. Humphrey Fellowship Program and an alumnus of the Indian Administrative Service, as well as a recipient of the prestigious Bronze medal and letter of appreciation for 10 years of dedicated service to the country from His Majesty the King of Bhutan.

The linkages Sonam made during her Scholarship in Australia have equipped her to connect with Australian partners throughout the years.

“The Australian Government is an important development partner for Bhutan.”