In 1997, Tashi Wangmo graduated as a Mechanical Engineer from the University of Wollongong (UoW) in New South Wales. She was one of the first AusAID graduates from Bhutan.

Before studying at UoW, Tashi studied at Sherubste College in Eastern Bhutan, at that time the only college in the country. While there, she was awarded the General Proficiency Medal (silver) in both 1991 and 1992. 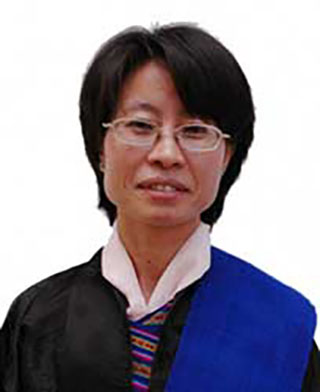 Tashi returned to the Civil Service in Bhutan in 1999, after completing her studies at UoW. She started as an Assistant Engineer with the Civil Aviation Division but transferred quickly to the newly-established National Technical Training Authority (NTTA). She began formulating plans and programs in technical and vocational education and training to be implemented locally.

In June 2003, the Ministry of Labour and Human Resources was created, which subsumed the NTTA.

In 2004, Tashi was tasked to establish a Policy and Planning Division. She accomplished this successfully, applying the analytical skills and academic training she received in Australia.

Acknowledgement of Tashi’s work came in 2008 when she was summoned by His Majesty the King and appointed a member of the National Council of Bhutan; the greatest national recognition. Tashi is one of five eminent appointees to this 25-member Council. The other 20 members are elected as part of Bhutan’s move toward a democratic constitutional monarchy. She is now part of this decision-making body as part of the country’s first democratically elected government and has vowed to devote herself to making a difference to the lives of the people of Bhutan.

Tashi participated in the South Asia Sub-regional Leadership Course in Sri Lanka and has received many accolades and awards throughout her career. She believes, however, that none of them would have been possible without the golden opportunities provided by her AusAID scholarship. She attributes much of her success to her studies in Australia. She believes her four and half years at UoW and her involvement with Australian society provided her with the strong foundation on which she built her life and career.