For Australia Awards alumnus Ugyen Namgay ensuring Bhutanese people’s voices are heard in the Parliament was a childhood dream. Now a National Council Member, Ugyen says the exposure he received through Australia Awards was instrumental in making this dream a reality.

“As a people’s representative, I am committed to ensuring that people’s voices, especially the concerns of people of Haa Dzongkhag are heard at the highest legislative body. I am deeply honoured by the trust people have placed in me. In line with the mandate of the National Council of Bhutan, I am committed to ensuring that the National Council legislates laws, review policies and provide check and balances to the government of the day, thereby strengthening security and sovereignty of the country”.

Ugyen Namgay was elected as a National Council Member from his native Haa District during the third National Council Elections in May 2018. With the conferral of the Blue Scarf and honorary sword by His Majesty the King, he formally assumed the role of Honourable Member of the Parliament at National Council of Bhutan.

“Inspired by my father who is a social worker and former people’s representative in the National Assembly of Bhutan prior to the introduction of democracy in the country, I dreamt of serving in the Parliament to represent views of people of Sangbaykha and Haa.”

“Australia Awards helped me build my skills and competencies including enhancing my CV and profile thereby raising my confidence to stand in the election” says Ugyen.

Ugyen started his career in the civil service as an Educator and Radio Producer in 2007. In 2009, he began work as an Assistant Planning Officer in the Ministry of Education and went on to take up the position of Personal Secretary to the Education Minister. While working as a Planning Officer in the Policy and Planning Division of the Ministry of Education, Ugyen was also deputed to the Office of Performance Management under His Majesty’s Secretariat for two and half years. His role included conducting organisational development exercises at the Ministry of Finance and Paro Dzongkhag under the advice of the Royal Civil Service Commission. Right before he resigned from the civil service in 2018, to start on his election campaign, Ugyen was awarded a meritorious promotion on command by His Majesty the King in recognition of his contributions and dedication to the civil service.

“It is all the work that I have done that led to this extraordinary recognition from His Majesty the King, which I am grateful forever” says Ugyen.

Ugyen has also proven an excellent academic record of accomplishment. He secured the Academic Excellence Award from Institute of Language and Cultural Studies topping BA Arts (Dzongkha). He also stood in 4th in the Royal Civil Service Common Examination. Ugyen completed his higher studies, Master of Public Policy, specialising in Development Policy, at the Australian National University on an Australia Awards Scholarship from 2012-2013. Ugyen says the opportunity to study at one of the best universities in Australia, the Australian National University through an Australia Awards Scholarship, is an experience he will always cherish. 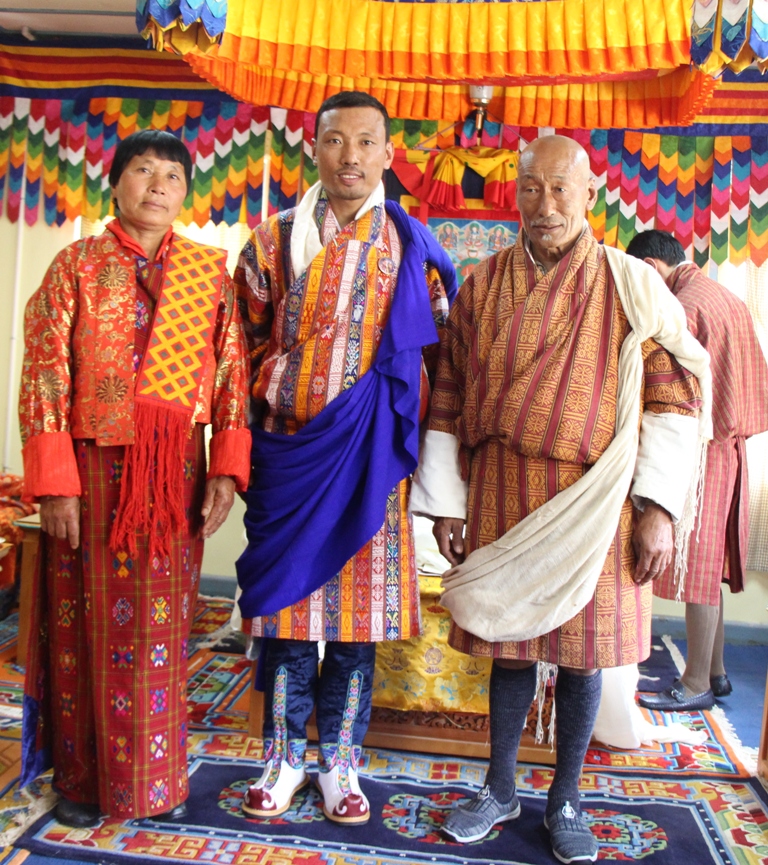 “Listening to lectures of international researchers and teachers, interacting with scholars from across the globe, networking with international friends and developing high-quality policy analysis skills are a few areas where I benefitted a lot. Further, I was able to develop proper linkages between Bhutan and Australia and its people through my role as the President of the Australia Bhutan Association of Canberra from 2012-2013. Some major activities the association carried out during my chairmanship included: strengthening the association, coordinating Bhutan’s participation at the Canberra multicultural festival, arranging a celebration of Bhutan’s national events in Canberra, starting a Dzongkha language class at Canberra, and organising Farewell-Welcome events for Bhutanese students and their families” reflects Ugyen.

Sacrifices and the demands that come with being a leader is quite familiar to this father of two. Out of sheer interest in social service, Ugyenhas undertaken various leadership roles since his school days. He held some leadership positions not only in Bhutan prior to his studies in Australia, but he also held some leadership positions as during at the Australian National University. Upon his return home following the Australia Awards Scholarship, Ugyen was also appointed an Executive Member and later the Chairperson of Bhutan Australia Alumni Association (BAAA).

During his tenure with BAAA, he initiated various programmes that helped uplift the community as well strengthen linkages between Bhutan and Australia. These included blood donation drives, professional development programs, and the launch of the Women in Leadership Network chapter in Bhutan. He also worked closely with the Australian High Commission in New Delhi, with the support of his Executive Committee colleagues, to coordinate and publish a Tribute Book to the Government and people of Australia titled An Alumni perspective, celebrating 15 years of diplomatic relationship between Bhutan and Australia. The book was launched by the Australian Ambassador to Bhutan and the Bhutanese Foreign Minister in December 2017 and was one of the highlights of alumni engagement in the region for that year.

He was also Bhutan’s first ever Australia Awards Ambassador – a role in which he actively conducted promotional and awareness campaigns at top research institutions, universities and colleges in Bhutan to promote the Australia Awards, Australian education and Australia in general.

Ugyen considers himself a humble citizen from a humble family. He had to go through a lot of hardships and challenges in life growing up in his native Haa community, which included walking for days to get to school, often negotiating hostile mountain terrains, forests and torrential rivers. Much of his educational life, starting from primary school through to undergraduate studies was spent as a boarding student away from home and family. These challenges and his deep roots in his local community, coupled with a fond admiration for his father, whom he looked up to as a leader and mentor, instilled strong leadership qualities in Ugyen from very early on in life. In his own words, “I’ve always been keenly interested in serving my community, readily taking on any role or responsibility that was required of me. And I shall continue to make positive contributions in my community and beyond.”